This is how “I live here” is written in Finnish:

As my friend wrote in a note with these words, “yes, you really have to put on those dots to make it readable to the Finns!”

“I live here” in Malayalam

In Malayalam, the official language of Kerala in Southern India, this is how “I live here” is written:

And it sounds like this (recorded in Jackson Heights):

“I live here” in Polish is “Mieszkam tu”.

In Hungarian, “I live here” is Itt lakom

Latest words and video: “I live here” in Thai

This is “I live here” in Thai – how it is written, and phonetically:

And this is how it sounds: 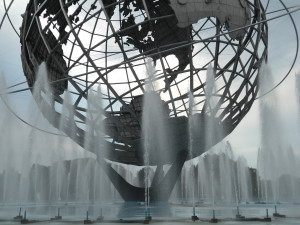 On September 12, about 40 representatives of immigrant-serving agencies gathered in a room at the Queens Borough President’s building in Kew Gardens.  This was one of the monthly meetings of the QBP’s Immigration Task Force.  I had been invited along to briefly introduce the “I live here” mural project.  Members of the task force are as diverse as the communities they serve.  The many organizations represented included Women for Afghan Women, South Asian Council for Social Services, Ansob Center for Refugees and the Brazilian organization Cidadao Global.

The coordinator of the group is Susie Tanenbaum, the Borough President’s Special Assistant on Immigrant & Inter-Cultural Affairs.   In a conversation afterwards she told me a bit more about the Task Force’s role.  It first started meeting in 2003, and its main purposes are education and network-building.  Usually it meets at the Kew Gardens building, but sometimes elsewhere, for example Flushing Town Hall or, each June, at Queens Botanical Garden.

Themes that come up regularly are immigration reform, health care reform, and labor rights in the workplace.  As Susie puts it they are issues that go beyond the local community, even beyond the country.  Guest visitors come to give talks.  Joe Salvo, Director of the Population Division at the NYC Department of City Planning, has made presentations on the NYC Census and on the changing demographics of Queens.  A representative of OSHA has given a talk about health and safety at work.   On the day that I was there, NYC Council Member Daniel Dromm spoke to the group and took questions – he represents District 25 which includes Jackson Heights, Elmhurst and Woodside.

As well as talking and learning about particular issues the group gets involved in Queens activities, such as preparing programs for Immigrant Heritage Week at Queens Museum of Art.

All the service providers, Susie explains, are keenly aware that even if they only serve a small population, they are working within a multi-ethnic environment.  That awareness – of many minorities, who together create the fabric of the place where they live – seems to get to the essence of why Queens communities are so strong.

At the beginning of the meeting, participants were asked to introduce themselves and to say a word that describes Queens.   Here are the words that they chose.  “Languages” was among them!

A huge thank you to Fred Gitner of Queens Library and Susie Tanenbaum for inviting me to this meeting.

I’ve been reading “On the Wall – Four Decades of Community Murals in New York City,” by Janet Braun-Reinitz and Jane Weissman.  It includes a description of how a muralist views a wall – and the traits of the ideal wall for a mural:

“For a muralist, the magic starts with the wall, which can exert a powerful attraction.  For most people, a wall encloses, protects, confines, defends, circumscribes, safeguards and restricts.  To a muralist, however, a wall is a potential painting surface that presents limitless possibilities.  Each wall has its own personality, and every artist must take its measure before determining if it is suitable for  mural.  The ideal wall is smooth and highly visible, facing traffic if on a one-way street.  It is unobstructed by billboards street signs, and windows or doors and comes already scraped and primed with a coat of light-colored acrylic paint. The sidewalk in front of the wall is level for scaffolding, and there is a tree for shade as well as access to running water nd nearby bathrooms and storage space.”

Of course, as the authors go on to imply, the ideal wall rarely manifests itself.  I’ll be sharing updates on this website of the search for the “approaching-ideal” wall in Queens for this project – a mural that will include the words “I live here” in the 160+ languages that are spoken in the borough.