I Live Here – A celebration of Queens neighborhoods

In April 2017, the I Live Here project joined forces with others to create an event at Queens Museum, engaging museum visitors with hands-on activities celebrating migration and diversity in the borough. The other event partners were Queens Memory, Bridget Bartolini of the Five Boro Story Project and Fernanda Espinosa of People’s Collective Arts/Colectivo de Arte Popular.

Check out the write up and photographs on the Global Grand Central website. 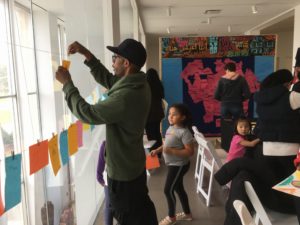 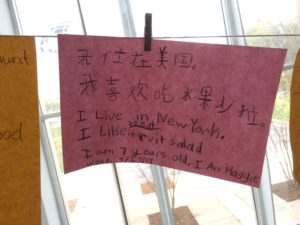 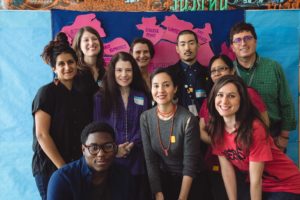 Students at Queens College designed these beautiful banners, working with their teacher, the illustrator and animator Ryan Hartley Smith.  First they designed patterns based on cultural artifacts at the Godwin-Ternbach Museum (located at Queens College), and then created original three-D typography spelling the words for “I Live Here” in languages spoken in Queens.

Thank you Ryan and his students! 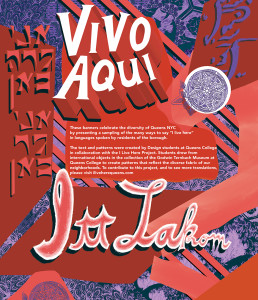 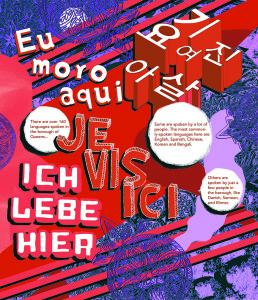 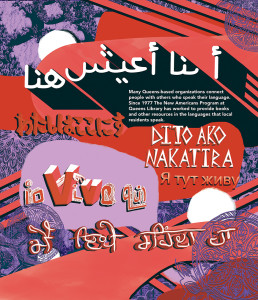 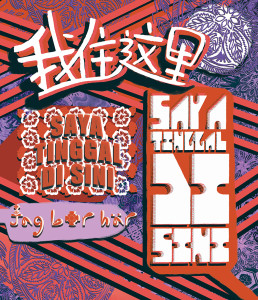 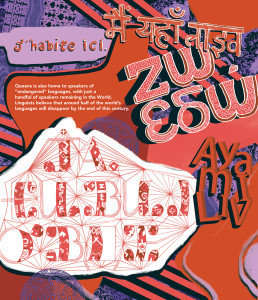 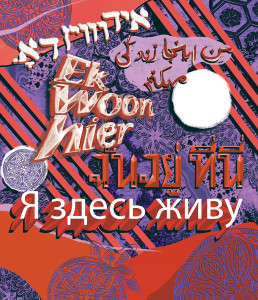 “I live here” in Georgian

Here is how “I live here” is written in Georgian:

“I live here” in Yiddish

Here is what “I live here” in Yiddish looks like:

“I Live Here” in Swedish

The latest translation of “I live here” – this is how you write the phrase in Swedish:

Keep them coming!  Check which of the languages spoken in Queens we still need the translations for.

Latest updates – “I live here” in Yoruba and in Latvian

So far I’ve gathered 63 translations of “I live here” in languages that are spoken in Queens, New York City.  Around 100 more to go!  If you live in Queens and speak a language for which “I live here” is not yet available on this webpage please get in touch with the translation: annabel (at) ILiveHereQueens.com

And the latest additions:

and in Latvian, it is: “Es šeit dzīvoju”

Recently I met with two Daniels to hear about their language projects.

Daniel Kaufman is the Executive Director of the Endangered Language Alliance.  There’s an excellent New York Times profiles of its work here.   As ELA’s website says, “Hundreds of the world’s languages are down to just a few speakers, and a significant percentage of the world’s estimated 7,000 languages are set to vanish before the end of the century.”  ELA  works to document and preserve those languages – largely in New York City which is a major hub for them.

ELA recently launched a series of events called “Unheard of” featuring live poetry and oral literature in endangered languages.  The first was in September at the Bowery Poetry Club on the Lower East Side.  It focused on five Indonesian languages.  Here’s Queens resident Rose Monintja reading at that event in her native language Tontemboan, which is spoken by around 100,000 people.  She is reading a creation myth called “The Story of Lumimuut and Toar”:

And PRI’s The World reported on the event here.

I also met Daniel Bogre Udel of the Wikitongues project.  Founded earlier this year, Wikitongues is gathering videos of people speaking all of the world’s languages.

Here’s an example of one of the many videos already on the Wikitongues YouTube page.  Tatenda speaking Shona, a Zimbabwean language:

Watch this space for future collaboration between ELA, Wikitongues and the “I live here” mural project: as a first step we are hoping to record speakers of indigenous Mexican languages in Jackson Heights.

“I live here” in Serbian

Previously I posted a video of “I live here” in Serbian, and the words for the phrase using the roman alphabet: Ja živim ovde.

Here is how it is written in Cyrillic script:

“I live here” in Serbian, written in Cyrillic. In roman letters it is “Ja živim ovde”.

This is how “I live here” is written in Finnish:

As my friend wrote in a note with these words, “yes, you really have to put on those dots to make it readable to the Finns!”

“I live here” in Malayalam

In Malayalam, the official language of Kerala in Southern India, this is how “I live here” is written:

And it sounds like this (recorded in Jackson Heights):