Yesterday I had the pleasure of speaking with Michael G. Haskins of WBAI radio about the “I live here”  mural project.

You can listen to our conversation here.

Michael told me about the radio station’s World Language Initiative.  He collects station IDs from listeners in different languages and plays them on the air – for example, “My name is Elsa, and I always have my radio tuned to 99.5fm, WBAI radio”.  You can hear some of them after the song at the start of the show – which, by the way, was a great choice: Morphine’s “You Speak My Language”.  I’ve linked to a video of a live performance at the bottom of this post.

If anyone wants to record a radio ID for WBAI please get in touch.

The radio station is now based at City College of New York, in Hamilton Heights.  By coincidence on my way there I saw a mural being painted on 138th Street.  It’s a beautiful project by CAW4Kids (Creative Arts Workshops for Kids).  Some pics: 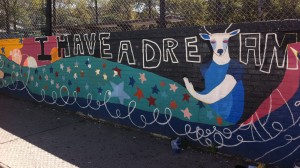