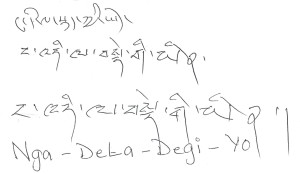 A big thank you to Tom Baker of New York Daily News for today’s article about the “I live here” project.  It starts:

“Do they have a Rosetta Stone for Samoan?

Transplanted Briton Annabel Short, 36, wants to provide one, launching a project to inscribe on a wall the phrase ‘I live here’ in the 160-plus languages spoken in Queens.

‘The key thing to make the project happen will be participation from the community,’ said Short, an Astoria resident.

And the two latest translations of “I live here” added to this website are in Burmese and Estonian:

The current (and growing!) list of languages spoken in Queens is here.  Get in touch with translations, short videos, suggestions.  Thanks!