Recently I visited the New Americans Program at Queens Library’s headquarters in Jamaica.  The program provides materials and activities to recent immigrants to the borough in the languages they speak – more about it to come shortly.

In the meantime here are two video clips of people who work for Queens Library, saying the equivalent of “I live here” in (Mandarin) Chinese and in Bengali:

Mandarin Chinese is the third most-spoken language in Queens after English and Spanish (and followed by Korean, then Bengali).

And here are flyers from just a few of the recent programs at the library: 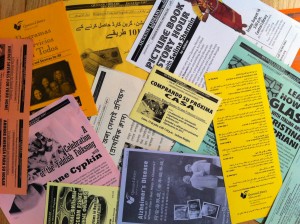 The latest wording for “I live here” added to the page of languages spoken in Queens is Danish: “Jeg bor her”.  If you would like to add words or video for another language, please get in touch!

So how many languages are spoken in Queens?

A simple idea: To create a mural somewhere in Queens, New York City that says “I live here” in all of the languages spoken in the borough.  Each version of “I live here” will be written by someone who speaks that language.

But of course, it turns out not to be so simple.

For a start, how many languages are spoken in Queens and what are they?  The often-cited number of languages spoken in Queens is “over 138”, which is taken from the 2000 census.  I called up the Census Bureau to find out if the 2010 census had a more up-to-date number.  The woman who picked up the phone told me that the 2010 census did not ask a question about languages.  She put me through to the American Community Survey, which does track the languages that people speak at home.

I talked with a woman called Elizabeth who patiently guided me over the phone through layer upon layer of the American Community Survey website to a chart for the borough of Queens called “Language spoken at home by ability to speak English for the population 5 years and over –  2007-2011 American Community Survey 5-Year Estimates”.  There, from French to Gujarati to Korean to Hmong were many of the languages spoken here.  But…there were only 80 categories altogether, and many were groupings like “Other Pacific Island Languages” and “Other Native North American Languages.”

I got in touch with Wai Sze (Lacey) Chan, the International Languages Librarian at Queens Library.  The library uses “more than 160” for the number of languages spoken in the borough, taken from the Department of City Planning.  Wai Sze broke the list of languages down a bit further.  There are still some gaps and questions though of course.  Over the next few months I’ll be working to fill them in.